Sung Sot cave is the most famous cave in Halong Bay which is in the centre of the UNESCO World Heritage area.

Sung Sot cave means Surprised Cave or Amazing Cave is on Bo Hon Island and is one of the most spectacular and largest grottoes of Ha Long Bay. The mouth of the grotto is reached by ascending about a hundred stone steps. 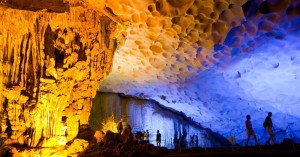 There are two partitions in Sung Sot cave. The first one is similar to a theater hall with many stalactites hanging from the high ceiling. A narrow passage leads to the second chamber, where a flow of natural light bathes the surfaces. The light is filtering in from above, through a large opening creating a natural skylight, this opening also serves as the exit from the cave.

The deepest point of this chamber a “royal garden” appears with a clear pond and a fascinating landscape of small mountains. Many birds and plants here.

Sung Sot cave covers some 10,000 m2. There are thousands of stalactites and stalagmites along the 500-meter paved passage. Light posts line the passage and illuminate the amazing scenery. Spotlights of varied colors are placed in such a way to be unobtrusive and add to the enchantment of the grotto.

Sung Sot cave is about 30 metres high, the walls and innumerable cracks and crevices are evidence of millions of years of spectacular natural creation. Close to the exit a mammoth formation stretches from floor to ceiling, tapering at the center to form a concave pillar that appears to be keeping the ceiling in place. Walking through the cave ones imagination can run wild conjuring up all kinds of fantastic creatures and fanciful creations.

Not only Sung Sot cave, on coming to Halong Bay, travellers will have chance to see many other Halong caves like Trinh Nu Cave, Tam Cung Cave, Luon Cave….